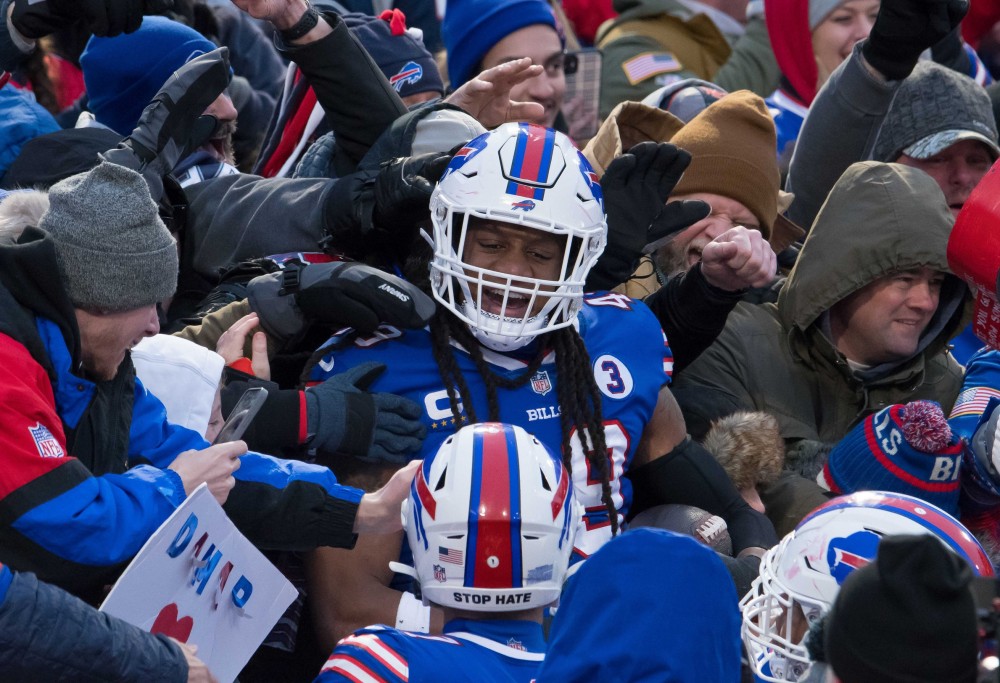 Josh Allen, Stefon Diggs, & Von Miller currently account for $89.4M of cap next season. Restructures will reduce that mightly, opening up room to explore a few upgrades on the O-Line, keep or replace their safeties, and make a decision on Tremaine Edmunds.

Ed Oliver (DT, 26)
The Bills were hoping to see a full breakout from Oliver in 2022, but the production per game pretty much aligned with 2021 - above average, but not quite elite. He projects to Dalvin Tomlinson’s $10.5M per year deal in our system.

Tremaine Edmunds (ILB, 24)
Edmunds finished his 5 year rookie contract with 565 tackles, 7 sacks, 2 forced fumbles, & 5 interceptions. He’s also the vocal leader of this Bills’ defense, and should have done enough to warrant a second contract in Buffalo - as long as the price is right. He doesn’t have the resume to warrant a top of the market deal (approaching $20M per year), but something in the 4 year, $44M range should work for both here.

A.J. Epenesa (DE, 25)
This one just hasn’t hit for Buffalo. Epensea holds a non-guaranteed 1 year, $1.4M contract, and the Bills would do well to find a trade partner, free up the cap space, and add a draft asset if possible.

Tim Settle (DT, 26)
Settle’s $4.9M cap hit for 2023 isn’t daunting, but as a role player (and an area where Buffalo will certainly be looking to upgrade), taking the $2.2M savings here makes sense.

This should have been the offseason we all discussed the big extension for QB Tua Tagovailoa, but his concussion history has to have paused that conversation indefinitely. In fact, bringing in a viable QB1a might be the big move this March.

Christian Wilkins (DE, 27)
The former #13 overall pick has been highly effective the past two seasons, and enters 2023 with a fully guaranteed $10.7M 5th year option salary. His production steers much more towards the run stop than the pass rush, which could temper the price tag for his second contract, though he still projects to a 4 year, $60M deal in our system.

Robert Hunt (G, 27)
Has flourished in this new explosive offensive style, and seems the perfect fit for Mike McDaniels going forward. He’s due a non-guaranteed $1.7M in the final year of his rookie deal, and projects to a 4 year, $34M contract in our system - though his ability to play multiple positions on the O-Line could increase that value quickly.

Keion Crossen (CB, 27)
Crossen’s 3 year free agent contract was structured with 1 year of guarantees. The Dolphins can free up $3.1M of cap by moving on this March.

The Patriots enter 2023 with half of their wide receivers, running backs, and offensive line slated for free agency. It’s a good opportunity to lock in a new coordinator, and build quickly around that new system. If 2021 Mac Jones can find his way back, they’ll be back in the thick of thing soon.

Kendrick Bourne (WR, 27)
For some reason, Bourne’s targets/usage were severely limited in his first two seasons with the Patriots. If the plan is to bring back Jakobi Meyers and possibly another veteran pass catcher this spring, the $5.5M to be saved here would be useful.

The Jets faltered down the stretch, as key injuries and a lack of consistent QB play wound up being their achilles heel. They’ll be one of the teams rumored to swing big for an NFL ready QB1 this March, with the likes of Garoppolo, Carr, Rodgers, Brady all in play.

Quinnen Williams (DL, 25)
Williams finally broke out in 2022, to the tune of 12 sacks, 51 tackles, and 2 forced fumbles across 15 games. He’s an $18M player in our system right now, but new deals for Jeffrey Simmons, Chris Jones, etc.. could ramp this defensive tackle market up, pushing him (well) north of the $20M mark when it’s said and done.

Zach Wilson (QB, 23)
Wilson is owed a fully guaranteed $9.3M over the next 2 seasons, plus an available 5th year option for 2025, but he may have to earn that elsewhere. An up and down 2022 culminated with a veritable benching down the stretch, putting his spot on the roster in peril. A Post June 1st trade can free up $3.85M of cap.

Corey Davis (WR, 28)
Davis enters a contract year in 2023, after seeing action in just 21 games over his first two seasons in NY. Moving on can free up a much needed $10.5M this offseason.